Express Yourself: 5 East Bay Kitchens Speak Volumes About Their Owners 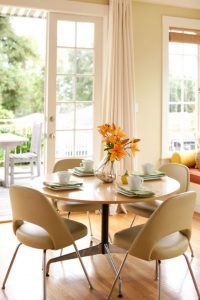 It Takes a Village

Cindy Flinn and Andy Nadler bought their 1904 Piedmont house for its potential, and their small L-shaped kitchen was in dire need of living up to that potential. With some modest upgrades, the family lived with the cumbersome space for a decade. “I wasn’t in any hurry,” explains Flinn. “I was more concerned about getting the job done right.”

It wasn’t until Flinn began renovating rental properties that she had the confidence to tackle her own kitchen improvement. When she was ready, she called in Oakland architect Grier Graff, AIA, to completely reshape the kitchen — into a functional rectangle. As the project began, Flinn asked everyone who walked in her front door for an opinion. She steered away from copying her previous rental designs and set out for a vibrant new look. During this time, Flinn became fast friends with fellow mom and Oakland-based architect Rebecca Schnier, AIA. Flinn and Schnier pored over the drawings as their daughters played in the other room. “Rebecca gave me great ideas,” says Flinn, “as well as the confidence to speak up when things weren’t as I wanted them to be.”

In the end, the kitchen took about a year and a half to complete, but Flinn — who doubled as the contractor, hiring her favorite subcontractors from projects past — encouraged the slow pace so she could consult with her trusted pals, including Walnut Creek–based kitchen designer Pam Sherman over each detail. “I credit Graff Architects for the general picture and my friends for making the kitchen sing.”
Such details include windows on three walls allowing all-day sun, honed Carrera marble counters, custom cabinets by Matt Longden of San Ramon, a fireplace with a slate surround for cool days, a beech dining table from Room & Board matched with celadon chairs from Knoll that play off the lemony green walls chosen by color consultant Lois Wachner-Soloman, and a colorful window bench inspired by yet another friend’s beach house that has become the most sought-after seat in the joint.

Other touches that add up to some of Flinn’s favorite aspects are the frosted glass on the upper cabinets and the limited number of upper cabinets. “Rebecca suggested I allow space for art, and I’m so happy we did,” says Flinn, showing off the paintings created by her now-adult daughter, Molly.

Interior designer Michael Friedes, inspired by the open and airy design of the kitchen, styled it to complement the fresh feeling that pervades the space. “This was definitely a team effort,” says Flinn, “and I couldn’t be happier with the results.”